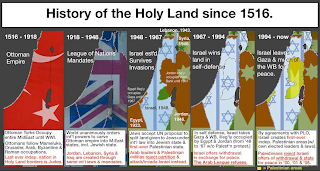 Now we come to one of the most discussed prophecies regarding Israel and her restoration among Bible Students, the one we refer to as the Prophecy of Jacob’s Trouble.  The prophecy is recorded for us in the thirtieth chapter of Jeremiah, and like the 83rd Psalm is full of much for us to think about and filled with both darkness and promise.  That’s because just like the 83rd Psalm, it is being fulfilled even as my readers read this.

I know the last sentence in the foregoing paragraph will surprise some of our regular readers, but in the spirit of letting God’s word speak for itself let’s see why we believe we can make that claim.  Part of th proof starts with the very first three verses of the chapter:

“The word that came to Jeremiah from the LORD: "Thus says the LORD, the God of Israel: Write in a book all the words that I have spoken to you. For behold, days are coming, declares the LORD, when I will restore the fortunes of my people, Israel and Judah, says the LORD, and I will bring them back to the land that I gave to their fathers, and they shall take possession of it."  (Jer. 30:1-3; ISV, underlining by me)

First let’s note that this prophesy begins with the bold statement “Thus says the LORD,” so the prediction is directly from God, in his own words.  So we are assured of its fulfillment for what he declares comes true (Isaiah. 55:8-11).  The rest of the prophecy, though, doesn’t support the thought that this prophecy would see fulfillment in the tie of the return of the Jews from their captivity in Babylon because it tells us that it would come after a destruction so thorough that people would say that it was “incurable” (vs 11).  That didn’t happen until the destruction of Israel as a nation in 70ad.

So that places the return of the Jews to the land of Israel past that, to our time, which is what this series discussed, the many other remarkable prophecies already discussed which point the way.  So at God’s due time the Jews returned and set up their nation.  But it is not without trouble:

We’ve already seen how true these words are.  The 83rd Psalm predicted the trouble and lack of peace as well and Israel is in a continuous state of war, one going all the way back to its creation in 1948.  Just the weekend before which this was penned ( August 10-11, 2013) there was an announcement of an impending release of “Palestinian” prisoners, many of whom murdered Jews in their sleep with axes!  So the war never ends.  This is consistent with the next part of the prophecy:

“Ask now, and see, can a man bear a child? Why then do I see every man with his hands on his stomach like a woman in labor? Why has every face turned pale?” (Jer. 30:6)

Here is where we come to the idea that “Jacob’s Trouble” is ongoing.  Any woman who ever gave birth can knows how it works out.  The pangs start out far apart and not really strong.  Then as time goes on they continue and grow closer together and stronger, more painful, until the baby is born.  Naturally fear and even terror become more pronounced, especially with those giving birth for the first time.  But the real point is that the process of giving birth takes time, lots of time.

The verse above draws that parallel for “Jacob,” or Israel, as verse seven informs us.  Jacob’s Trouble is not a sudden event, it plays out over time and we believe that time began in 1878 when the time for exile ended.  Although the Jews did begin their return then, the Ottomans continued to place roadblocks in their way.  Britain occupied the Holy land and at first tried to expedite the return of the Jews, only to later place roadblocks of its own as the creation of the modern state of Israel drew near because of politics.  However, like childbirth, Jacob’s Trouble does have an ending point:

We do not take this to mean that Jacob, or Israel, will be spared trouble.  Rather, we take the verse to mean that Israel will be spared what to the human mind will appear the inevitable conclusion, destruction at the hands of the enemies overwhelmingly arrayed against it.  That deliverance, though also expressed as one reads on in this chapter of Jeremiah, will be the subject of the next prophecy we plan to examine, the prophecy of Gog of Magog.

Posted by Stanley Loper at 2:31 PM No comments: