"...In Fellowship With Him We Were Healed!" 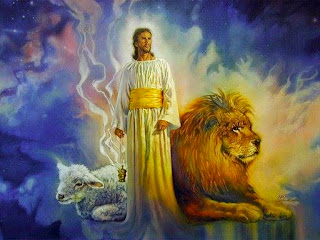 "He was pierced for our defiance; he was crushed for our crookedness; he bore the punishment for our peace; and in fellowship, with him, we were healed."
Isaiah 53:5
New Proposed Rendering

A pair of students of the Bible with an understanding of Hebrew were doing a study of the "suffering Messiah" passage in Isaiah (52:12-53:12) and had one of those "aha!" moments when they'd noticed something different about the text in Hebrew when compared with common translations and even a quotation of 53:5.  The thing is the Masoretic Text reads as presented above.  However, most English translations render the last clause as "and by his stripes, we were healed."  Added to that is that the LXX translates it that way and Peter, or whoever later translated it into Greek if Peter originally penned it in Hebrew, used the LXX as their source for the quotation of this verse.

The problem is a classical study in being careful when reading Hebrew to see what is there instead of what one expects to see.  That's because the two words with such radically different meanings are so close that in Hebrew with vowel points added the differ by one dot, that is all, just one dot.  That dot is called the Dagesh Forte and it tends to have the force of doubling the letter so that, for instance, if placed in a chet ( ח ) it will give us two of them ( חח ).  It also takes certain consonants with a soft sound and hardens it.  This is what we have here.  In the verse above the second bet ( ב ) doesn't have the dagesh forte so that the word is Chavurato H2270 which comes from the Hebrew word chavar that according to Holladay's A Concise Hebrew and Aramaic LexiconOf the Old Testament means a "comrade, companion," hence to fellowship with. (pg. 94)

However, sometime before the birth of our Lord and before the invention of vowel pointing somebody misread it as Chaburato H2250, meaning "to bruise, stripe, wound, blow.  (BDB as I couldn't find the word in the more up to date lexicon).  So it was translated as "wounds" or "stripes" in the LXX and early translations of the Bible in many languages based on the LXX used that so that when folks finally started going to the Hebrew text they never noticed the missing Dagesh and continued reading it as if it had it.  The error was further compounded by placing the word Chavurato in Hebrew lexicons as an example of a variance of the word  Chaburato.  How the error crept in is a matter of speculation, however, the most likely scenario is that the Egyptian translator of that portion of the Old Testament didn't have Hebrew as his first language and made an honest mistake.  But there is something else, another factor I will get into in a moment.

When the vowel pointing was invented the scribes preserved the standardized articulation of the words of the Tanakh as they knew it.  And other such pointed versions have the same articulation here.  So this was how they understood it should read.  And why not?  Plug that translation of the clause into the passage as a whole and it fits with thoughts such as him "justifying many" (Vs. 11), "see his seed" (vs. 10), and "he will divide the spoil with many" (vs. 12), and others.  So this translation of the verse states and essential truth of Christianity, that all have to enter into fellowship with our Lord or know him as their personal savior to have eternal salvation.

To stress the importance of this is that this is an example of why we need to pay attention to what is in the text instead of reading what we expect to see in it.  We have further confirmation of this understanding of the verse in the New Testament since Is. 53:5 was apparently the source for what Paul wrote to the Phillippians:

"be found in Him; not having my own righteousness of Law, but through the faith of Christ, having the righteousness of God on faith, to know Him and the power of His resurrection, and the fellowship of His sufferings, having been conformed to His death, if somehow I may attain to a resurrection out of the dead."
(Php 3:9-11)

Lastly, I would like to point out something.  Whether by simple mistake or deliberately done (we do know from tradition that some passages were deliberate to confuse gentiles and hide some things by the translators), Providence overruled the matter and turned the alteration into a messianic prophecy which saw fulfillment.  So what we see here is a passage and it's variant in another language both having fulfillment, both of them!  How amazing is that?

Until next time!
Posted by Stanley Loper at 1:10 PM 1 comment: