"I will send for many hunters" Israel In Jeremiah 16 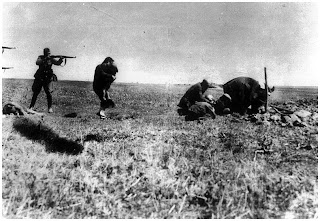 “For my eyes are on all their ways. They are not hidden from me, nor is their iniquity concealed from my eyes. But first I will doubly repay their iniquity and their sin, because they have polluted my land with the carcasses of their detestable idols, and have filled my inheritance with their abominations."
(Jer 16:17-18)*

Thus ends one of the more remarkable prophecies found in God’s word which reveals both how the Jews would return to Israel, but when it would start.  The two golden verses tell us when.  More than 120 years ago a famous Pastor figured out what was meant by those two verses, that Israel would endure a period of rejection by him and scattering among the nations of equal length to the time of favor they enjoyed when he began dealing with them more as a nation with the death of Jacob.

1842 years later that time of favor came to an end with the conversion of the Roman centurion Cornelius and his family, as foretold by the prophecy of the seventy weeks in the book of Daniel (9:24-27) and that favor didn’t return until another 1842 years passed.  That period ended in 1878 when Jews were permitted to own property in the holy land and began their return with the founding of Petah Tikvah, the Gate of Hope.  I explained those two verses first because what follows in this study will bear the explanation out.

“Then you shall say to them: 'Because your fathers have forsaken me, declares the LORD, and have gone after other gods and have served and worshiped them, and have forsaken me and have not kept my law, and because you have done worse than your fathers, for behold, every one of you follows his stubborn, evil will, refusing to listen to me. Therefore I will hurl you out of this land into a land that neither you nor your fathers have known, and there you shall serve other gods day and night, for I will show you no favor.'
(Jer 16:11-13)

The entire chapter mostly focuses on the Jews being thrown out of the land of Israel.  The first 10 verses prophesy destruction on an unprecedented scale and humiliation.  This passage tells us why, their unfaithfulness to God.  However, this passage and the remarkable prophecy we are examining both indicate that he wasn’t talking about their exile to Babylon.  They would be exiled “into a land that neither you nor your fathers have known,” that is a land not within the realms they knew of.  That would prove to be all too true after their exile by the Romans.  They ended up in the far-flung parts of the empire, but mostly in Eastern Europe, an area only known as the realms of barbarians in Jeremiah’s day.  Their dire situation there with its pogroms aptly fit the last declaration in these verses “for I will show you no favor.”

What comes next was so remarkable when it was pointed out to me by a book** first published 124 years ago that I was taken aback at how accurately it portrayed what actually happened throughout the 20th century to the Jews:

Think about that prophecy for a moment.  The exodus to the land of Palestine, as it was known in 1878, began with a trickle out of the North, Russia that is.  But as time went by the trickle increased.  But it wasn’t enough in God’s eyes.  So he did something about it as the next verse prophesied:

“"Behold, I am sending for many fishers, declares the LORD, and they shall catch them. And afterward I will send for many hunters, and they shall hunt them from every mountain and every hill, and out of the clefts of the rocks.
(Jer 16:16)

The first part of verse 16 fits the Nazis under Hitler like a glove.  Under his supervision the Jews were imprisoned in concentration camps and during WWII his troops hunted the Jews down to destroy them taking millions of Jewish lives in the process.  That persecution provided the impetus for the speeding up of the Jewish return to their homeland and then the creation of the nation of Israel.

But it didn’t end there.  By returning to verse fifteen we find that they would also be brought back from “all the countries where he had driven them.”  Once the Jews established the nation of Israel the Jews started flooding into the nation, often prompted by more persecution from other “hunters,” the Muslims of the Arab world which did their work so thoroughly that there are Muslim lands with virtually no Jews in them.  However, the exodus would continue when communism fell and Jews who’d been persecuted under that system now became free to flee to Israel.  So the exodus from the “North” entered a second phase and the flood became such that now, for the first time in almost 2000 years there are more Jews in Israel than in the rest of the world combined.

But that’s not the only jaw-dropping prophecy I plan to cover.  Next will be a Psalm which I believe to be in the process of being fulfilled right now as its being carried out over a longer period of time than most prophecy scholars realize.  I will see you then.