430 Years Where? : The Deads Sea Scrolls and Bible Chronology. 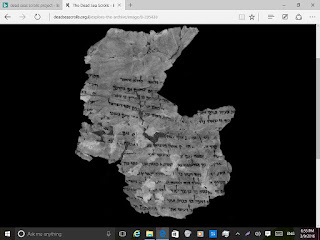 Above is a screenshot I took of a fragment which is part of the Dead Sea Scrolls collection and to reach it I used the identifier 4qedxcex12c.  This is taken from the Dead Sea Scrolls Project online and what we learn from the identifier is that it is from a group of fragments belonging to a particular scroll covering Exodus Chapter 12.  I went looking in the Dead Sea Scrolls to find out what they might show us about Exodus 12:40-41, which records the fulfillment of an earlier prophecy given to Abraham.  The problem is that there are two different variants of this passage and those variants are often cited among Bible Students in regards to the matter of Bible Chronology, and in a wider context regarding Bible veracity.  This is what I found.

It seems straightforward enough, doesn't it?  However, we run into several problems with that passage, which is from the Masoretic Text (MT).  The first is that it appears to conflict with the prophecy itself which we find at Genesis 15: 12-16 and is as follows:

”And He said to Abram, Knowing you must know that your seed shall be an alien in a land not theirs; and they shall serve them. And they shall afflict them four hundred years; and I also will judge that nation whom they shall serve; and afterward they shall come out with great substance. And you shall come to your fathers in peace. You shall be buried in good old age. And in the fourth generation they shall come here again; for the iniquity of the Amorites is not yet full."
(LITV)

The first is the difference in years mentioned, and the second is the number of generations.  a quick check of the genealogical record shows that four generations does not cover four hundred years.  It just does cover the time from when Jacob enters Egypt at the invitation of his son, Joseph and the reigning Pharoah until they leave.  So what is going on here?  what appears is the case is that there is a difference in reckoning matters god has set up to confuse things a bit.  Genesis apparently does two things.  The promise counts four hundred years from when the promise was made and the generations which actually resided in Eygpt.  In Exodus Moses, under inspiration, counts the time from when Abram entered the land of Canaan after leaving Haran when his father died.  Stephen invokes Genesis in his exposition in Acts 7:2-6 and Paul invoked Exodus in his exposition to the Galatians, 3:17.  However, even with that realization we are still left with a problem because the scriptures say the sons of Israel spent 430 years in Egypt or do they?

We really have two variations witnessed to in the manuscripts.  The first is found in the Masoretic Text and is as follows:

The second is witnessed to by the LXX, the Samaritan Pentateuch and the Bohairic Coptic:

And the sojourning of the children of Israel, while they sojourned in the land of Egypt and the land of Chanaan, was four hundred and thirty years.
(Brenton's English Septuagint)

So which is it?  Were they in Egypt the entire 430 years or not.  This is where the fragment above comes in as it is the oldest witness to the text of interest here and Bible Students generally prefer the older witness.  In the catalog of Dead Sea Scrolls, the fragment is listed as following the Masoretic text.  However, as we looked closer we saw reason to question that view.  Here is a close up of the portion of the fragment containing the passage of interest:

What we see here are verses 39 & 40.  Those who can read Hebrew have no problem seeing that verse 39 is completed while verse 40 appears to start on the next line at "land of Egypt..." and this is apparently the basis for the judgment on the part of the cataloger.  Obviously, something is missing here, the portion of the text from the beginning of verse forty to the word "land."  We have no way of knowing the quality of the photo the cataloger had to work with or if he was working with the manuscript itself.  This photo is from the newer enhanced digital photographs now available online for scholars and others with an interest in the Scrolls to consult and of better quality than the other two.  And that's where things get interesting.

Now look at what we circled in red.  That is where the line ends and is a clue to what is missing from the text.  We see a break in the material but right after that is the letter "נ" or "n."  That letter is easily missed even in this image if one isn't careful.  In earlier images, it probably is even harder to spot.  Here is the text again of verse forty with the missing portion in red:

And here is what is there with the "נ" and another word, the Hebrew "ארץ" in the text in red, which shouldn't be there if it follows the MT:

However, it makes all the difference in the world.  That is because the only way the letter and word would be there at all in that spot would be if the text originally read "The time that the sons of Israel lived in the land of Canaan and the land of Egypt was four hundred ad thirty years."  Add to that the space of the missing text is more consistent with that that than the shorter Masoretic text.  So instead of following the Masoretic reading, as the catalog states, the fragment instead follows the alternate text preserved in the LXX.

We know from the Dead Sea Scrolls that there were a number of different versions of the OT text found in the caves of Qumran, all of them dating anywhere from the second-century bc to the first-century ad.  The Masoretic and the LXX represent the two most witnessed to with the Masoretic first followed by the Hebrew-LXX.  Since we don't know the methodology in making that determination we are not going to give the exact percentages here since there are parts of the OT where there is more agreement between the two than differences and the Pentateuch is one of those parts.

But the important point here for us is that the oldest witness to a key Hebrew passage in the Exodus clarifies a problem the Masoretic Text actually makes and resolves an apparent contradiction for us.  God apparently included the land of Canaan in the four hundred years of prophecy probably because it was under Egyptian domination for much of that history and not fully independent.  But it also gives us a starting point marked in the bible beginning when Abram left Canaan which is prophetically important since Paul invoked it in Galatians.

We are living in an exciting time, my brothers and sisters.  We now have the Dead Sea Scroll witness because God broke the small cartel of scholars who kept it under lock and key away from the rest of us.  Many other manuscripts have come to life.  and thanks to the efforts of such men as Dr. Daniel Wallace even more and even in some cases, older manuscripts of the NT in Greek are coming to light.  We have much more in the way of ancient material to work with than Brother Russell had and some of that increases the light thrown on the languages themselves.  And I am sure there will be much more to come in the time left as God makes preparation for the kingdom to come.

Let's enjoy these times and make the most of them as we complete our course.
Posted by Stanley Loper at 10:59 AM